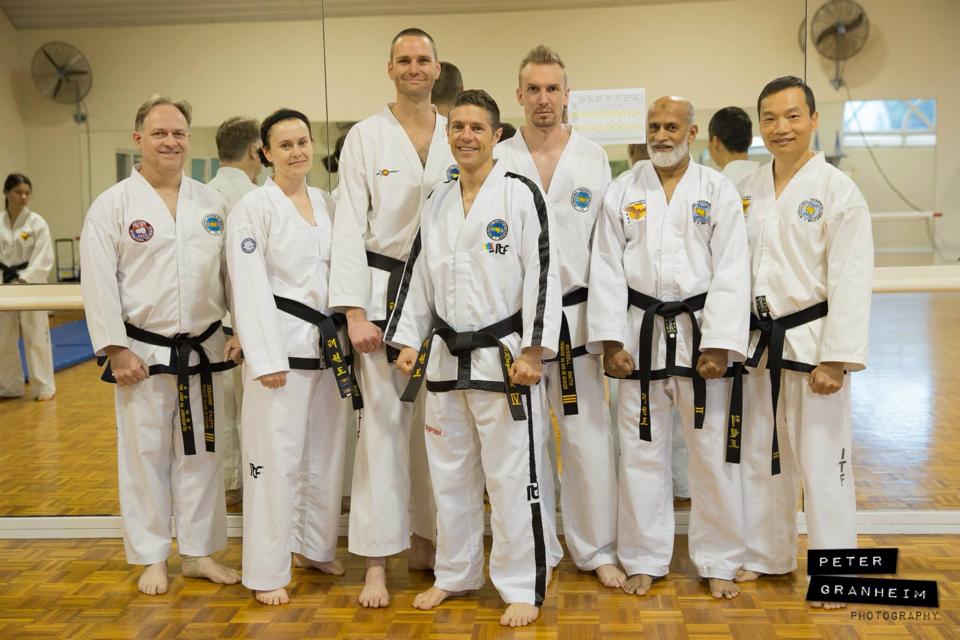 It was real history in the making on Sunday 21 September 2014 as three of our very own Platinum Taekwon-Do instructors stood tall alongside five other candidates to be tested for their next Dan in ITF Taekwon-Do in front of a panel of seven examiners. It was an especially significant grading with the achieved ranks to be III, IV and V (the step to IV Dan is also the crossover into expert class and International Instructor and Examiner). For Paul this represented the culmination of just short of 20 years of Taekwon-Do which highlights the level of dedication that each of the candidates has given to the art!

Suzy Moore, Michael Harwood and Paul Raymond had put in the necessary concentrated and consistent preparation in the lead up in order to excel, practising inside and outside the dojang, individually and together and it showed across all the required elements.

If you weren’t lucky enough to attend the event, check out our facebook posts and YouTube videos to get a feel for how the day panned out.

It not only takes courage, but also the support of your family and friends to achieve something of this magnitude to such a high standard and I would like to take this opportunity to congratulate Suzy, Michael and Paul on their fine efforts and thank everyone who played a part in their journey and attended the grading.

Thanks and compliments to Peter Granheim (II Dan) and Martyn Boyle (5th Gup) for the photos. A special thank you also to Master Peter Barbour for conducting the challenging examination and the other examiners who assisted.

Below are the individual thoughts from our newest III, IV and V Dan instructors as well as a write up from one of our I Dans looking on. 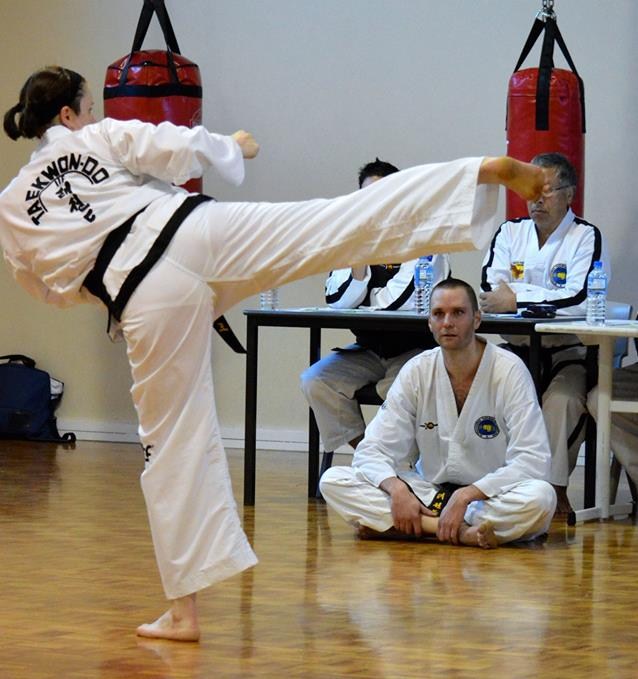 The Dan grading held on 21st September 2014 was one of the highlights of my Taekwon-Do career. It was a privilege to grade for my third degree alongside Sabumnim Paul Raymond (V) and my husband Michael Harwood (IV) as well as the four other blackbelts who participated. The highlights of the day were Sabumnim Paul’s Moon-Moo Tul and the camaraderie between all the participants which built throughout the day. It was incredible to feel the support from those who had come to watch and I look forward to providing the same goodwill for my friends grading in the near future. 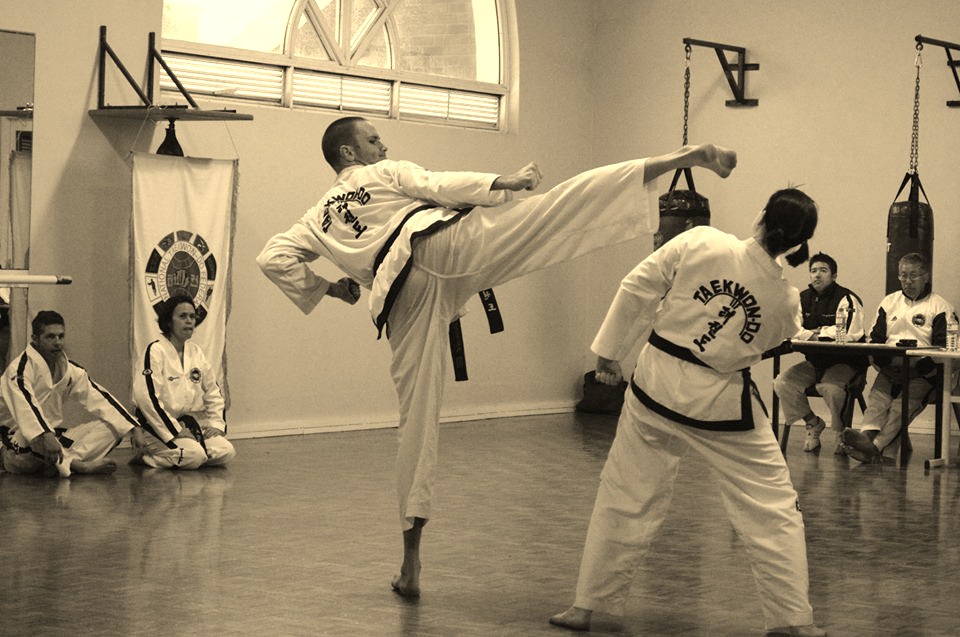 My IV Dan grading was definitely one of, if not the, highlight of my year. While it was every bit as physically tough as I expected, the strong support from the other six black belts grading (including my wife Suzy), my instructors Paul and Adeline and the many spectators helped me get through the grading in better shape than my previous black belt tests. The many long hours of preparation were well spent and the feeling at the end of the day was hard to describe, but one I can highly recommend! I am looking forward to the next challenges (including Moon-Moo) and joining the other Sabumnim’s on the examiners bench at grading. 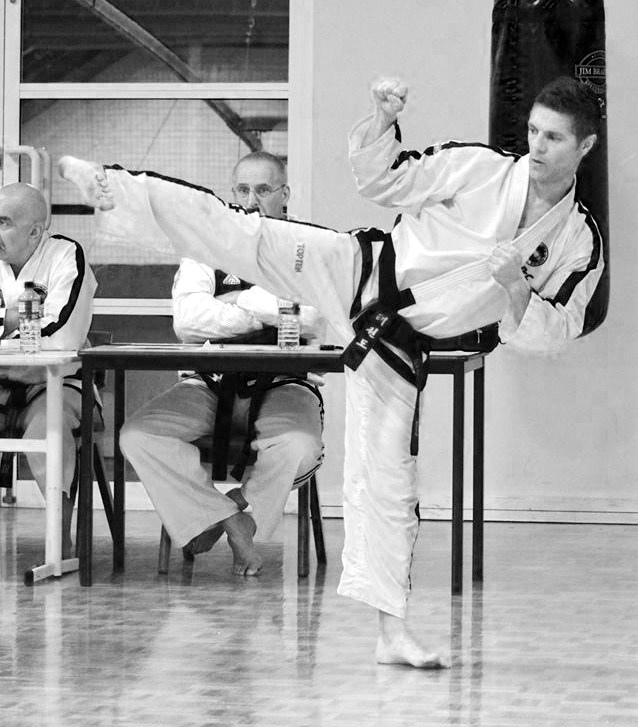 I had been graded, and certainly conducted promotional testings for others more times than i can remember, but this grading was going to be different. I was testing to V Dan and although there were six other candidates, I was, as stated many times over by Suzy Moore III Dan, the headline act!

But was I prepared? Technically, yes, and mentally, yes. Physically? Who could really be ready for a 4 hour testing which included fundamental movements, 5 rounds of physical fitness followed by one on one questioning by Master Peter Barbour VII Dan, the 21 patterns up to IV Dan, step sparring, free sparring, close combat, destruction and three rounds of the “attitude test”?

That thing we call indomitable spirit starts to take on a real meaning to you. I WILL finish this, I WILL do my best in every thing I am requested to do! It is this determination and focus that our students learn from their Taekwon-Do training. It’s not easy but we have the desire and work ethic to keep going to achieve something worthwhile.

Well I did survive, and very much enjoyed being the main attraction, but also showing everyone the results of my training. My special thanks go to Adeline Cheong V Dan, my wife and motivator; my training partners Michael Harwood IV Dan and Suzy Moore III Dan; all my students who continue to train and share my love for Taekwon-Do; and Master Barbour VII Dan for facilitating the grading and for his kind words at the end of the grading.

For those thinking about trying Taekwon-Do I strongly encourage you to do so. The best time to start is right NOW!

It’s oddly stressful throughout the “waiting” stages of a grading, arguably more stressful than the grading itself. When I arrived to watch the Dan test including my instructor Paul Raymond and senior to myself Suzy Moore and Michael Harwood, I instantly felt nervous. Notably it was not even my own grading! The pressure placed on these candidates is enormous, and no matter how hard you train and study the waiting stages of a grading will still remain a time where emotion will find the candidate. But I could not have had more faith in these individuals knowing just how hard and effectively they had worked during the journey toward reaching their goal of completing this Dan test successfully.

Whilst it may not have been their first test, this does not make it any easier to complete. With that said they certainly made it look easy, each stage faced by these candidates was with a fire in their belly. There was no fear visible, only a clear intention of completing each task with all the tools they had available. There were even a few smiles along the way. It was at this point I realised the hard part of a grading could be considered the preparation and journey to get to this end point. Not only does the individual have to study, train and consistently apply himself or herself to Taekwon-Do, but they must also have a passion and desire for it. They must prioritise Taekwon-Do as a lifestyle choice rather than a simple end of day activity.

Upon their sweaty victories these three slightly battered candidates could not have appeared happier. Nor could their colleagues be more proud of their formidable achievement. When you consider how much time, effort, frustration and passion has been put into and endured through-out their journey of achieving their new belt it’s not hard to see why.

Each Dan test has appeared different to me, depending on so many factors. It’s never really easy to anticipate what the day may bring despite all the planning and preparation, but it is easy to see that each individual who undertakes this process has a desire to learn and grow spiritually and physically. I have much to learn from these candidates and as always remain inspired by their efforts and achievements in Taekwon-Do, the rest of us have a lot to live up to.